Exploring Barcelona by bike is a great way to move around the city and get to know it better. It’s the most sustainable form of transport in the city, and the extensive network of bike lanes and paths allow you to move across the city safely and easily. There are in fact 30 specifically adapted zones with many bicycle lanes and traffic speed restrictions.

From 2015 to 2018, the Barcelona City Council organised a huge project to increase the number of bike lanes and built a whole network of new ones, so that now, 95 per cent of the population has a bike lane less than 300-metres from their house. Surf in Barceloneta Beach.

New bike lanes are also being planned this year along Meridiana, between the streets of Mallorca and Navas de Tolosa-Josep Estivill.

While the city’s bicycle scheme Bicing is only for residents, there are a myriad of places to rent bicycles in the city, many of them located in El Born or around the Parc de la Ciutadella. Here a map where you can see the bicycle lines already existing in the city (pink) and the new ones (red). 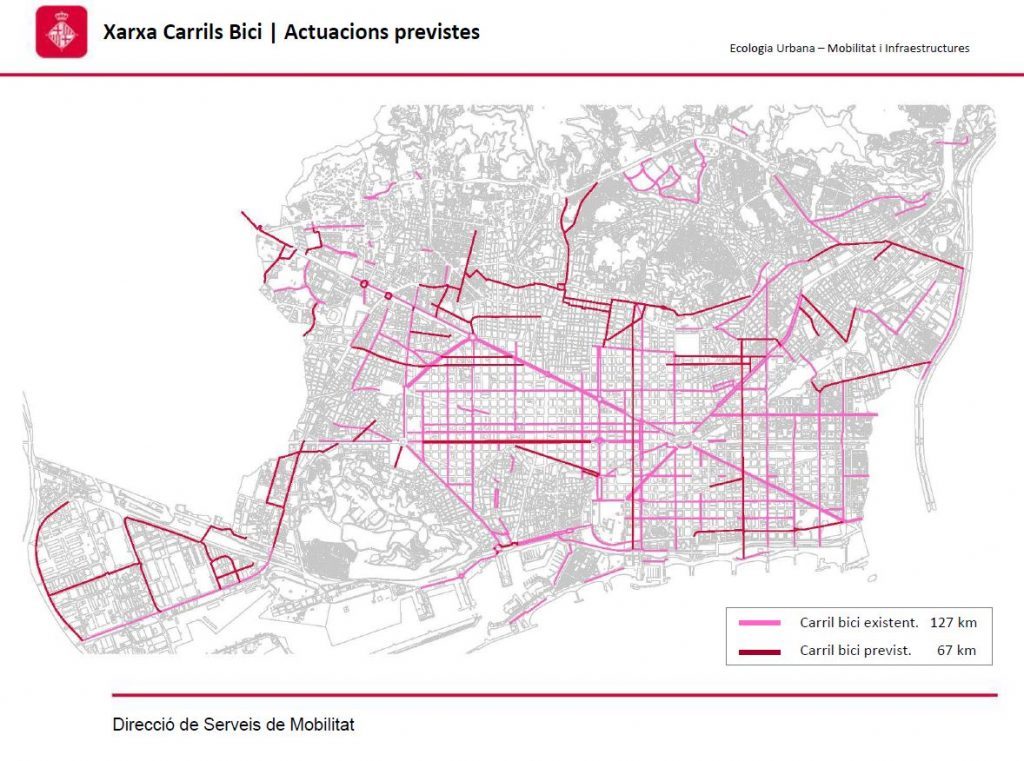 Here are some of the best areas and routes to discover the city:

Barcelona’s four kilometers of beaches are ideal for bike riding, mainly because they all have boardwalks or esplanades, which run alongside them. What’s more, many of these also have specific bike lanes. It’s the ideal place to ride, enjoying stunning coastal views along the way. It’s also relatively flat, so is great for those who don’t want to have to work too hard. As the beach area is lined with many restaurants and bars (chiringuitos), you’ll also find plenty of spots along the way to stop for some refreshments.

Cycling by the beach. Photo: Shayan_Flickr

Montjuic Hill sits to the south-west of the centre and is a leafy and green space, filled with many parks, gardens and museums. Although there aren’t as many specific bike lanes on the hill, it’s a quiet place with very little traffic. Because the ride is up hill, cycling here can be challenging, but it’s well worth it for the amazing views of the city. If you really want to push yourself, try cycling right to the top to the Montjuic Castle.

Ciutadella Parc is the city’s main park and a great spot for cycling, as it’s lined with many interlinking pathways. It’s the ideal place for combining your cycle trip with a picnic or even a row boat on the lake. The only issue is that it’s not very big, and can often be crowded with pedestrians, so you might want to combine this route with cycling up Passeig Lluis Companys, through the Arc de Triomf and upwards Plaça de Tetuan.

If you’re really up for a challenge, then you can’t beat the Collserola Natural Park, the large forested hilly area surrounding the city. While some of the pathways up there are really only for experienced mountain bikers, the Carretera de les Aigües, a 9km pathway, which circles the city, is perfect for most levels. You need a sturdier bike than just a city bike, because it’s off road, however the pathway is very wide and flat in many parts. One of the main reasons for cycling up here is for the incredible city views you can enjoy while you cycle. One of the easiest ways to reach the pathway is to take your bike on the L6 train line from Plaça Catalunya and alight at Peu del Funicular, from here you can take the funicular up directly to the Carretera de les Aigües.

If you’re not sure where you want to go and you just want to relax and look at the scenery, without worrying where you’re going, then a bike tour is the best option. You’ll be led by an experienced guide who knows exactly where the bike lanes are located, and can show you some of the most interesting parts of the city. You’ll also learn a lot about the Barcelona’s history and culture as you go. The Barcelona Guide Bureau offers some excellent bike tours, including a Photo E-Bike Tour and a Daily Bike Tour, which takes you not only around the Parc de la Ciutadella, but also the historic barrio of El Born, the hipster neighbourhood of Poblenou and along the beach.

Remember, you can only cycle along the pavements if they have more than three to five metres of free space, and in pedestrian zones, they always have priority. You must also wear a helmet when cycling on the roads.