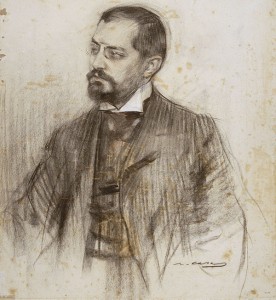 Take a glass of Codorníu, 2017 has been declared the year of Josep Puig i Cadafalch due to his century-and-a-half anniversary.

This year, many institutions are offering several events to commemorate the birthday of this master architect, archeologist and politician. In addition, it’s been 100 years since he became president of Catalonia. L’any Puig i Cadafalch, ‘The Puig i Cadafalch year’, is organised by the Catalonia’s Department of Culture –making a contribution of 300,000 euros– alongside with the Councils of Barcelona, ​​Girona, Lleida and Tarragona and the municipalities of Barcelona, ​​Mataro and Montblanc.

Many things will be going on in the coming months. From exhibitions in the National Museum, to events and conferences about this historical character, they are all taking place in several buildings of him. Some activities will be held in Paris and Harvard.

As you perhaps already know, the most prominent architects in Barcelona’s Art Nouveau movement, and perhaps in the city’s history are Gaudí, Domènech and Puig. I prefer to call this our real GDP. They are the three pillars of catalan modernisme. Puig (pronounced like “pooch”) has been considered the last architect from the Art Nouveau movement and the first one in Neoclassical architecture in Barcelona. His life, the sociopolitical situation and the cultural influences shaped the architect’s style in many ways.

J. Puig i Cadafalch – L. Domènech i Montaner – A. Gaudí i Cornet

As a historian, Puig conducted many projects of archeological research and taught Art History. In addition, Josep Puig i Cadafalch (1867-1956) was a heavy-weight politician since he became President of Catalonia, while he was being named Doctor Honoris Causa by the greatest universities, such as Harvard University or Paris–Sorbone University. No wonder he got so many honors, if you look at his most prominent restoration in Montserrat, and we are glad to show it to the people, we take our visitors there in an exclusive trip, the official Montserrat tour.

So, yes, indeed, it is possible. In this world you can achieve a lot in many different disciplines just in one lifetime. To accomplish so many projects, J. Puig i Cadafalch was surrounded by great mentors, the one who introduced the Art Nouveau Movement in Barcelona: the also polyhedral architect, teacher and politician Lluís Domènech i Montaner. However, despite the commonalities they shared as geniuses, GDP is a synonym of anything but concordance.

Taking part of the discord

Since the early beginnings of his career in his hometown, Mataró, Puig was a sensible person, his personality was permeated by loads of curiosity and bold thinking. He felt attracted by the architectural lyricism of other times and countries. This is how we explain the reminiscence of gothic and northern European arts in his buildings.

You just have to take a look at his famous Casa Amatller, right next to Antoni Gaudí’s Casa Batlló and close to Domènech’s Casa Lleó Morera.

That’s why the famous Block is called the ‘block of discord’ and this is how you can easily compare the different tastes of artists who are inscribed in a movement where precisely you aren’t inscribed in any particular style.

Casa Ametller and Casa Batlló, you see why it’s called ‘the block of discord’

Therefore, the artistic personality of Puig is usually defined by a flamboyant gothic influence, something the three geniuses had in common, yet it is more evident in the architecture of Puig. What else could they have in common? Well, Puig, just like his two fellow rivals, he became a huge fan of arabesque styles and the skills of master carpenters and bricklayers. In the early beginnings of the Catalan modernisme, the GDP trio was playing with red bricks, glass ceramics and colourful explosions, setting a giant cornucopia of civil and non-civil constructions.

Although Puig had a prolific and long lasting life, his architecture evolved in many directions, due to the combination of his career with the exile and his political career, not to forget the ups and downs of Spanish history, from the Catalan Renaixença (new birth) until the dictatorship of Franco. These changes in his architectural principles explain the sensibility of Puig, which made his stylistic personality known as “stone poetry”.