While visiting Barcelona, you can’t miss the Park Güell –it’s a must! No other work by Antoni Gaudí better reflects the complete and perfect harmony of nature and architecture than Barcelona’s Park Güell. Initially designed as an English-style garden-city–hence the official name Park– it finally became Barcelona’s most unusual public park. The best way to enjoy every detail of this amazing park is with a guided tour. And if you can join the visit of the two Gaudí’s master pieces in the same day, you will appreciate the incredible mind of this genious.

The failure of an ambitious housing estate project

Park Güell was an attempt to create a housing estate in a natural setting in the old village of Gràcia: an ambitious property development project commissioned by Gaudí’s patron, Eusebi Güell. The architect chose an uneven site covering a surface area of 15 hectares where 40 detached houses were to be built. But only two were actually completed, and Gaudí lived in one of them. It is now a museum devoted to the architect’s life and work. Gaudí prepared the site of Park Güell between 1900 and 1914, showcasing his urban-planning concerns by building paths, porticos, arcades and viaducts that were fully integrated into Barcelona’s natural surroundings.

PHOTO: One of the porticos, which adopts the shape of a great wave.

Gaudí‘s characteristic vivid imagination is revealed in the different elements that amaze visitors from around the world that come to Barcelona. The gatehouses, which were originally designed as the caretaker’s house, are now home to the Park Güell Interpretation Centre. The flight of steps, with its famous dragon covered in coloured broken-ceramic pieces, leads to the hypostyle hall, an impressive space comprising 86 columns which underpins the plaza above. The undulating bench around the perimeter of the plaza was designed by Jujol, one of Gaudí‘s associates in the construction of this unique park, which has been declared a World Heritage Site.

PHOTO: A detail of the huge undulating bench, by architect Jujol

Remember the entry of visitors to the monumental area of the Park is restricted, so that the space can be kept under good standards of service and sustainability. Therefore we recommend you to book your tickets in advance online or call us. A general guided tour runs every day in several languages. Groups are of 25 people maximum and the tour lasts 50 minutes. The Park Güell has trusted the team of BGB to manage the guided visits of their premises, so you will enjoy the experience for sure! ?

If you want to book a private tour and visit two masterpieces by Gaudí, the Sagrada Familia and the Park Güell, have a look at our “Private Gaudí in essence”. Just check the reviews and see what our customers say about this tour! 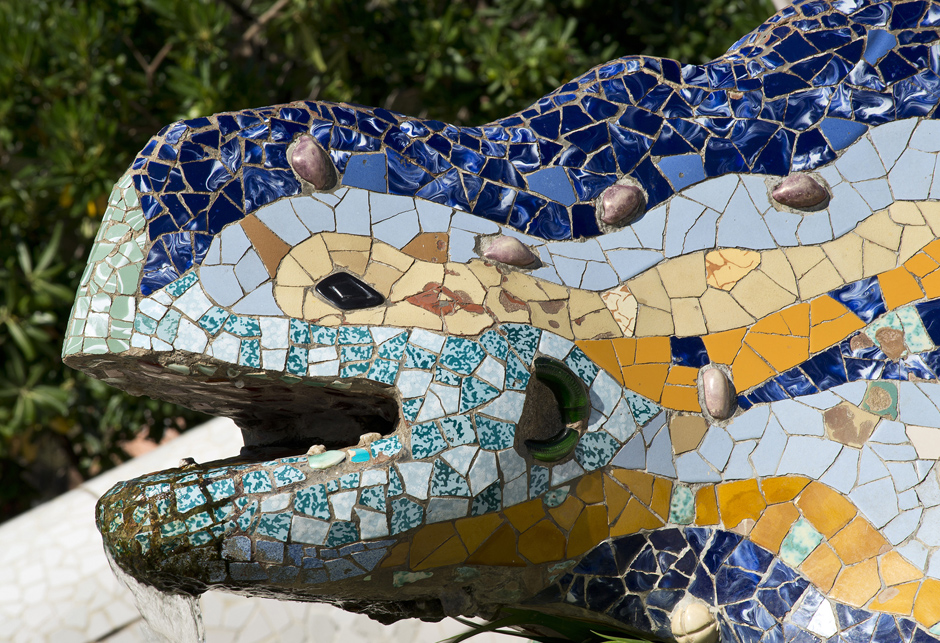 PHOTO: The mosaic dragon has become the most popular image of the park.