The ‘balcony code’: What do the flags in Catalan buildings mean?

Once you are in Barcelona or in another Catalan city, you would probably notice that in many balconies or windows there are different kinds of flags. You would likely recognise the ‘senyera’, the official Catalan flag with its four red stripes on a yellow background. But there are many other varieties that you may not know, and their respective meaning.  In these rather hectic but also exciting times, where political issues are present in most aspects of the daily life of Catalan people, hanging one or another flag from the balcony or window has become a free and non-violent way of expressing a political and social opinion.

The following article is written with the purpose of being a small explanatory guide regarding the meaning of some of the flags that you may find while taking a stroll.

Four red stripes on a yellow background with a blue triangle on the left side (chevron) and a white five-pointed star in its centre.

This is probably the most known variety of the Catalan independent flag. Its name refers to the star that is on the left (‘Estel’ in Catalan is star). Although it is now very used, it is not considered an ‘official’ flag because Catalan Republic hasn’t been recognised as for now. It was designed by Vicenç Albert Ballester, an activist who got the inspiration from the Cuban and Puerto Rican flags (shapes are really similar, but the colours are different).

This similarity refers to what is called ‘The disaster of 1898’, after which Spain lost all of its colonies. Although there is another version from 1908, with a blue diamond in the centre, Ballester’s flag appears during the Catalan autonomy campaign of 1918 and 1919. An official flag had to be chosen, and finally the Statute of Autonomy from 1932 chose the ‘senyera’ as the official emblem of Catalonia.

Since 2014 the creator of the ‘Estelada‘ has its own square in Barcelona. It’s near the Parc de la Ciutadella, in the crossing of Passeig de Lluís Companys and carrer Comerç. 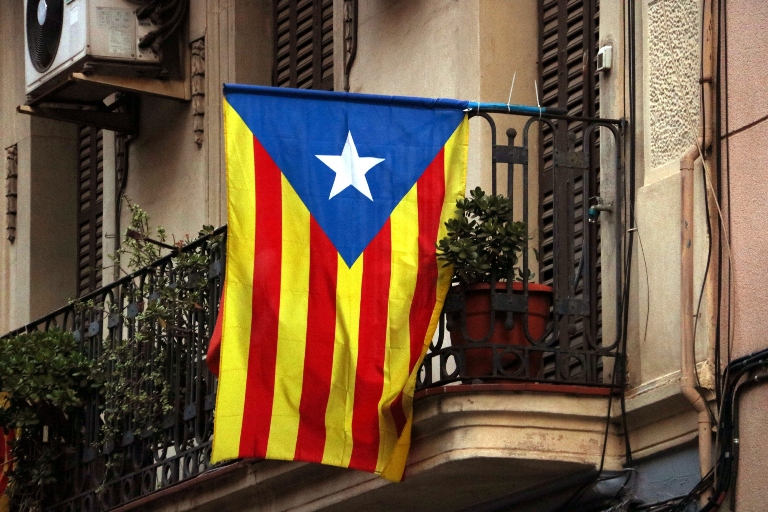 One of the main differences from the other flag is the use of colour in the emblem.

They share the same distribution of elements but only in red and yellow, the ‘red’ estelada’ is commonly used by the left-wing political parties and/or sector of communist influence, while the blue estelada is linked to nationalist parties. It was originally used back in the 60’s and 70’s by the  Partit Socialista d’Alliberament Nacional (PSAN). 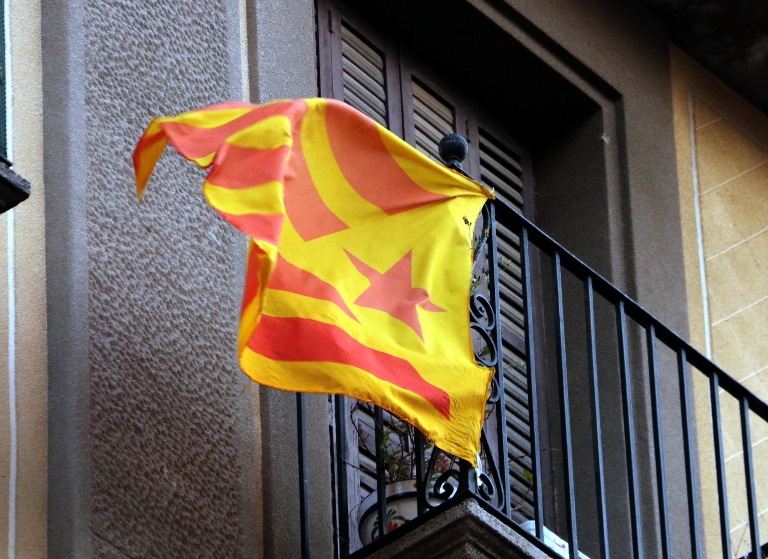 In 2014 this flag was used to commemorate the Tercentenary of the War of Succession.

With a style that may resemble a ‘pirate’ flag, it includes a white x-shaped cross as a symbol which represents Santa Eulàlia, one of the Saint patronesses in Barcelona who was crucified at a very young age in this kind of x-shaped cross.

The black flag is a symbol of resistance and it was used by the Almogàvers back in the 14th century. During the War of Succession also waved a black flag in the castle of Montjuïc of Barcelona. 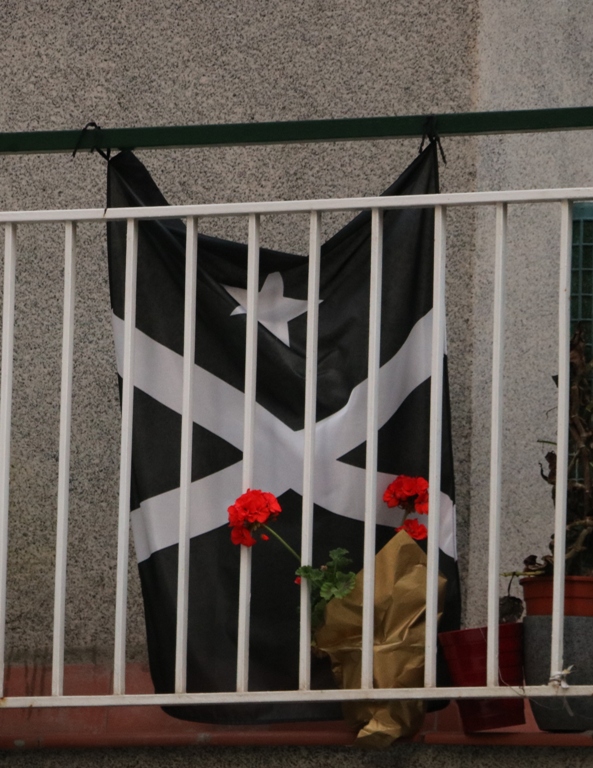 Flags with the word ‘Sí’ written on it

Promoted by the Catalan National Assembly (ANC), a civil organisation not linked to a political party, this flag started to appear when the debate of the Catalan referendum was being talked about among Catalan society. Many associations like ANC or Òmnium Cultural demanded a ‘Sí’ to express the will to obtain the independence of Catalonia. Despite not being officially recognized by the Spanish state or by the international community, the consultation on self-determination was held on October 1st, 2017. It had a participation of over 43%, almost 2.3 million people voted, and the ‘Yes’ option received 90% of the votes. 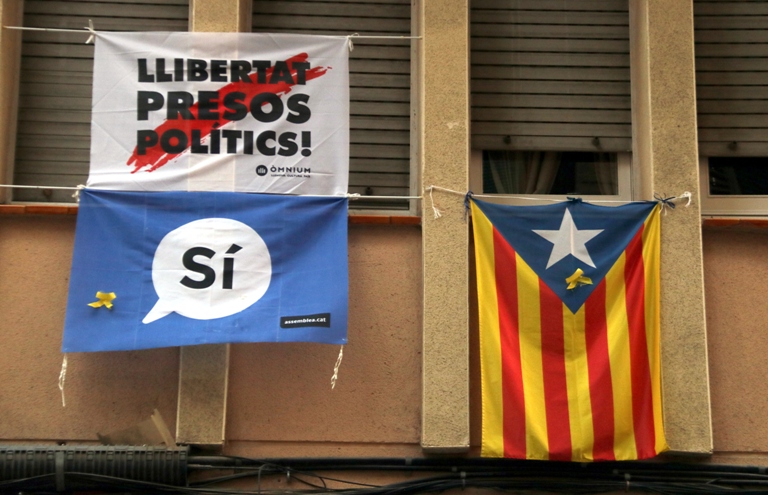 The symbol of a heart with the Catalan, Spanish and European flag on its background

This logo, more likely seen in the shape of stickers glued on poles or as street furniture, was first used by centre-right wing party Ciudadanos (Cs), as they are against any option of independentism. They are convinced that Catalonia belongs to Spain, as much as Spain belongs to Europe. They consider that breaking this situation is a massive risk to the population, and that the separatist movements are responsible of what they consider a ‘conflict’ that has to reach an end as soon as possible. 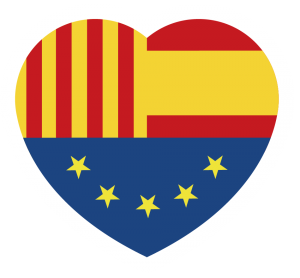 Recently, yellow has become a very visible colour on the streets in Catalonia. It is the symbol of remembrance of the Catalan politicians who are in prison or abroad, avoiding their legal issues with the Spanish court. The presence of yellow ribbons appear in balconies, painted on walls or even in the shape of yellow plastic bags with the shape of ribbons that, afterwards are tied to lampposts.

Popularly known as the ‘tricolor’ flag, it has three stripes in red, yellow and purple. It was the official flag from the beginning of Franciso Franco‘s dictatorship back and the flag of the Spanish Republican government in exile until 1977. Many associate the claim for Independence in Catalonia with the urge of leaving the monarchy behind and start a new state as a republic. 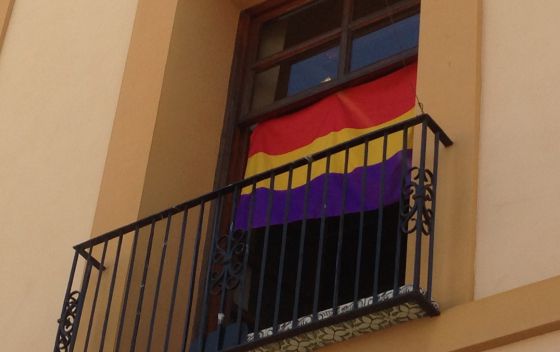 The flag of Spain

(Bandera de España), colloquially known as “la Rojigualda”, as it is defined in the Spanish Constitution of 1978, consists of three horizontal stripes: red, yellow and red, the yellow stripe being twice the size of each red stripe. Traditionally, the middle stripe was defined by the more archaic term of gualda, and hence the popular name rojigualda (red-weld). The origin of the current flag of Spain is the naval ensignof 1785, Pabellón de la Marina de Guerra under Carlos III de España.