In the 4th centrury BC, Turó de la Rovira (Rovira Hill) was occupied by the Laietani, an ancient Iberian tribe. Further north, the Laietani also occupied another hill peak at Puig Castellar, where remains of the settlement can still be seen. Historians believe that the settlements were abandoned because of the Second Punic War, fought between Carthage and Rome between 218 and 201 BCE.

During the 19th century a surge of immigrants increased the number of Barcelona residents, causing the city to expand to reach Turó de la Rovira. Summer houses for the wealthy began to be built in the area and the nearby quarry at Can Baró provided building materials.

At top of Turó de la Rovira sit the Bunkers del Carmel, a remnant of the Spanish Civil War (1936-1939). The 360 degree panorama made it an important strategic site for the defence of Barcelona.  Anti-aircraft batteries were also set up on Montjuïc and in Poblenou, forming a triangle of fire.

At Bunkers del Carmel you can see the anti-aircraft batteries that were built in 1937-1938 after a severe wave of fascist bombings in 1937. Four Vickers 105mm guns were used by the Republicans. The bombers passed the sights of the anti-aircraft guns, but the amount of firepower was inadequate. In order to not run out of ammunition, gunners opted for a slow rate of fire. The maximum height the Vickers guns could shoot to was about 8,000 meters.

Despite the limitations, the anti-aircraft equipment of DECA (Special Anti-Aircraft Defence Unit) and the Republican Air Force delivered a significant deterant, hindering the bombings and giving the population ample warning. Attacking planes were forced to take many precautions and fly high. From the time alarms sounded, a passive defence system consisting of nearly one thousand underground shelters offered the civilian population effective protection.

For the first time in history, and in a systematic way, a city is bombed not only with military objectives but to frighten the population. In a period of almost two years the city of Barcelona suffered almost 200 bombing raids.

Bombing raids were conducted primarily by the Italian Aviazione Legionaria based on the island of Majorca. They were joined later by Spanish fascist air power. The aim of the airstrikes was, firstly, to destroy the industrial capacity needed to supply the front as well as transport and energy infrastructure and secondly, to demoralize the population.

Republican fighter planes based in Sabadell and Canudas (El Prat Llobregat) were also used to repel the bombing attacks. Coastal defense Squadron 7 was the first to act, followed by fighter group 71 and finally the Soviet Polikarpov I-15 “xatos” (snub nose) and I-16 “mosques” (fly) aircraft. The I-15 was equipped with radio communication and adapted for night patrols. Manufactured also in Catalonia, these planes played a significant role in the Republican effort.

Continuing air strikes and advancing overland troops caused Barcelona to fall to the fascists on January 26th, 1939. Throughout the period that Barcelona was attacked from the air, between 2,500 and 3,000 people were killed. 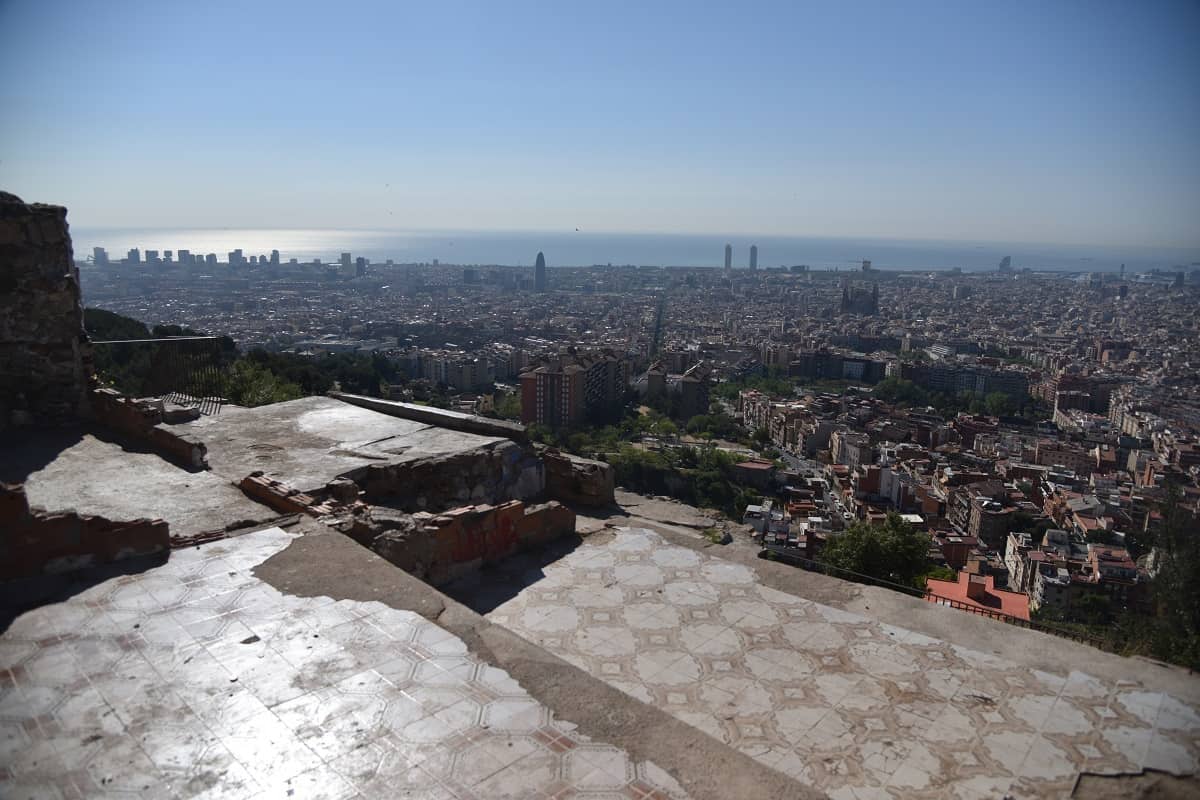 After the Civil War, Barcelona saw its population grow again as a result of immigration from depressed regions of Spain. Barracas (shanty towns) sprang up and by the 1950’s up to 100,000 Barcelona inhabitants lived in makeshift accommodation, accounting for approximately seven percent of the population.

The area of Bunkers del Carmel became a shanty town called Barri dels Canons. Immigrants used the abandoned military structures to form the foundations of a new neighborhood. For many years, there was no infrastructure to support the inhabitants. Barri dels Canons was the last shanty town to be cleared in Barcelona, finally being demolished in 1990, coinciding with the pre-Olympic Barcelona. The site was excavated in 2006 and it became an official historic site of the Museu d’Història de Barcelona (MUHBA) in 2011.

How to get to Bunkers del Carmel

Scenes from the film Tengo Ganas De Ti (2012) were shot at Bunkers del Carmel. For a good place to eat nearby, try Las Delicias.