Fire celebrations: only for crazy and sensible people!

Dancing to fire makes you feel you are in an ancestral atmosphere. It is often a representation Good vs Evil, people dress as demons and dance to the sound of drums, which increases the ancestral feeling to it. 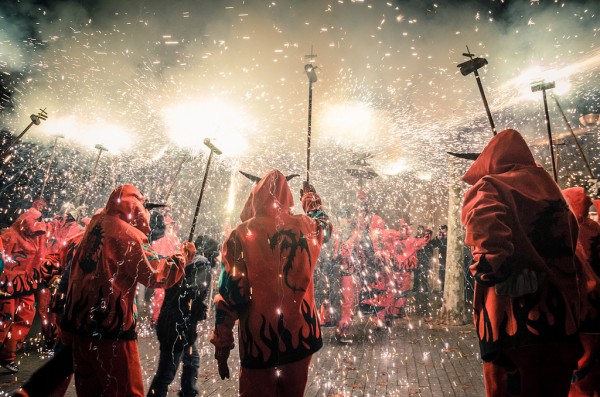 Smoke and sparkles fill the streets during a Correfoc

These fire celebrations are often a mixture of Christian and pagan traditions. In fact, when Christianity arrived to Catalonia, many festivities were placed on the same dates as the pagan festivities that had been there until then, with an intent that in time the pagan traditions would disappear. An example is Sant Joan which is also the summer solstice.

There are so many places to see and things to do in Barcelona, but the authentic experiences come from getting together with the locals. A great place to do that is with the local festivals, many of which are related with fire. Here are the most outstanding ones, or at least they are my favourite:

Each town has its own ‘Festa Major’, where you will find all kinds of activities and concerts. If you check the programme, you will most probably find a ‘correfoc’, literally a fire-run.

A group of people dress as devils, light fireworks and dance to the sound of drums. There is usually an itinerary throughout the old part of a town ending with the ‘traca final’ or the grand finale.

Everyone is welcome to join in, just wear proper clothes! Go completely covered from head to toes with cotton or natural fibres.

On the night of 23 June, everyone goes out to celebrate the shortest night of the year with noise and light. It is the Revetlla de Sant Joan, or Saint John’s Eve, also the summer solstice.

Smaller children and the most prudent play with sparklers and snaps, the more romantic ones prefer the fountain light show, there is a myriad of options for those who like the bangs of firecrackers, and the most expensive ones are rockets, that jut into the sky.

If you love fireworks head for the beach, that’s where everyone meets. You will also find some bonfires, at the end of the night, when the fire is low people jump over it. It’s the best night of the year for those who love fireworks, and one to stay at home for those who are scared. It would be our 4th of July. 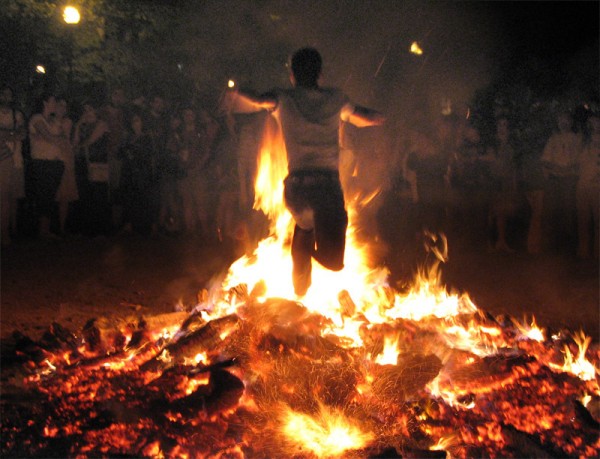 Jump over a bonfire in Sant Joan

If you don’t like so much excitement, in the afternoon of the 23rd you can await for the Flama del Canigó, a flame that is brought from the Canigó mountain in the south of France down to Barcelona and Plaça Sant Jaume. The arrival is celebrated with some Sardanes and the dance of Giants and the Eagle of Barcelona.

La Patum is one of the oldest celebrations in Europe: the first mention of the Patum is in 1454! It’s a battle between heaven and hell, with angels and demons, fireworks and music. In 2005 it was declared by UNESCO as an Intangible Cultural Heritage of Humanity.

Berga is a town located at 100 km north of Barcelona, at the foot of the Pyrenees. The Patum is always during Corpus, so like Easter, the dates change slightly every year, it’s a week around the end of May or June.

The Patum is celebrated in a small plaza, so from all the rauxa and craziness, again, beware and have some ‘seny’. Cover your head and neck, wear cotton and especially wear comfortable closed shoes – there’s so many people there is a high probability someone will tread on your foot.

There isn’t fire in this Dance, but it has this ancestral atmosphere to it, with a mixture of pagan and Christianity atmosphere. The enchanting moment is when the skeletons come out and dance to the sound of drums.

The dancing takes place on Holy Thursday, just before Easter in the beautiful old village of Verges, in the Empordà region (near the Costa Brava). The town is so small that you need to be there really early to find a nice spot, or you can even book a seat in the main square. 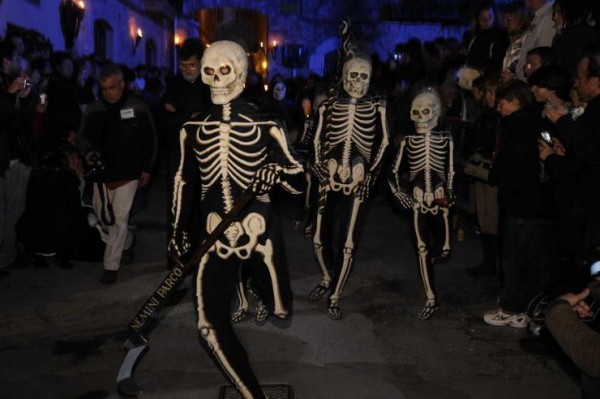 Yes I know, this isn’t in Catalonia it’s Valencia, but it is the largest expression of fire and a very crazy ‘rauxa’ celebration, so I just couldn’t skip this one.

Falles are satirical monuments critical with whatever is happening at the moment. They are built in papier maché and are exposed for 4 days. The last day is Saint Joseph’s Day, when there winner is saved and all the others are burned down, just for fun! The pyrotechnic is deafening and the whole town smells of smoke and gunpowder, it reaches its peak with the Mascletà, which makes many Correfocs in the neighbouring Catalonia seem like a children’s game. 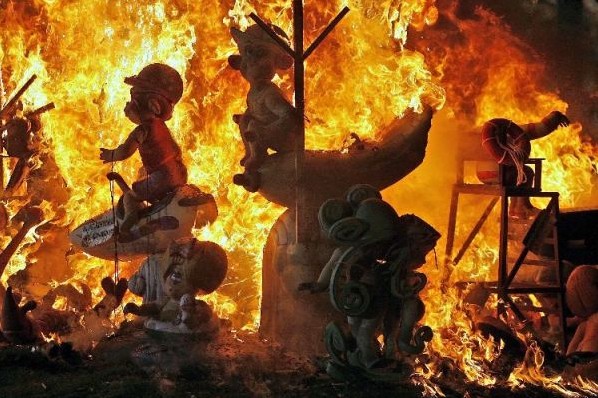 All except one of the Falles de Valencia are burned down

If all towns in Catalonia have ‘correfocs, many towns in Valencia region have the falles, by far the most famous falles are in the capital, town of Valencia. Falles are held during the ‘Festa Major’ of the town, in the case of Valencia it’s Sant Josep, on 19 March. UNESCO declared the Falles an Intangible World Cultural Heritage of Humanity in 2016.

There is a crazy twist to these festivals, but of the good kind

It is said that the Catalans are a mixture of seny and rauxa. Seny being common sense or down to earth, while rauxa is the complete opposite, an outburst of craziness that then goes back to seny.

A good example of this are the traditional celebrations, some at first sight seem boring, there’s not the passion you will find in the south of Spain or in Flamenco. And in other cases it seems totally crazy like when you include fire in the celebration.

Some might even thing but what’s wrong with this people?? They sure seem to have lots of fun but it is completely irresponsible and dangerous to play with fire in this way. But remember, behind the crazy rauxa is always some seny and common sense. The sensible part is to get ready previously: especially to dress properly, be covered in cotton or other natural fibres if you are going to play a part in the fire celebration and above all wear comfortable and covered shoes – flip flops are the worst option!