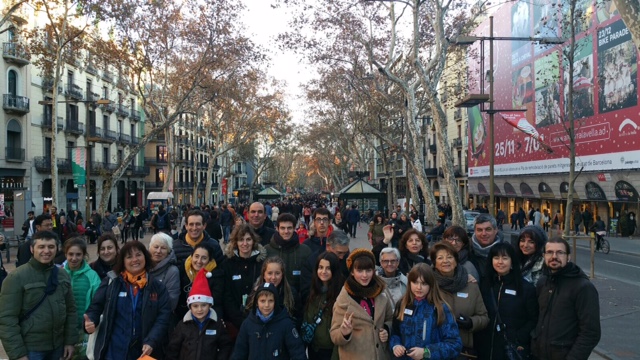 Our participants during La Marató Tv3 in La Rambla

The first Marathon of TV3 took place in 1992. It is a solidarity project promoted by Televisió de Catalunya, Catalunya Ràdio and Fundació La Marató de TV3 and focused on obtaining economic resources for the scientific investigation of diseases that, for now, have no definitive cure. This is a good cause to which every year BGB collaborates. This year our company has managed to raise 1,500€!!!

The TV3 Marathon goes beyond fundraising. It makes an important task of sensitizing the Catalan population regarding the diseases it is dedicated to and the need to promote scientific research to prevent and cure them. For La Marató, the collection of money, such as the scientific dissemination, awareness and education of society in scientific culture, is so important.

Throughout Catalonia, entities of all kinds are organized by doing various activities in order to raise money and, at the same time, have a good time. Lotteries, concerts, races, theater, breakfasts, lunches, snacks, dinners ? championships of all kinds…  And that is why Barcelona Guide Bureau thought about organizing altruistic guided tours.

Often, relatives and friends ask us to participate in any of the guided tours we make. So we tied it all together!

This was the 5th year that BARCELONA GUIDE BUREAU has participated. In previous editions, we have made visits to the Gothic Quarter, La Ribera, Casa de la Seda, Casa Batlló and this year we have walked across the Rambla: El Raval. See what happened last year.

From the first moment it has been exciting. Trace the route and design the dossier we have done among all. Teamwork has been very important and rewarding. It has been a good excuse to meet us several times to learn and share knowledge, illusions and even to know ourselves a little better…

The days of the visits have been radiant. People of all ages and interests have participated. We have had a few sunny days, beautiful moments! Friends who come every year tell me that Christmas parties begin the day of our guided tour.

Every year there are “homework” to do during the year. To highlight:

– Visit the exhibition at the CCCB “AFTER THE END OF THE WORLD”.

– Become a member of the National Library of Catalonia.

– Go to the theater in the Raval: the Theater of the Library of Catalonia; Teatre del Raval; Café Llantiol …

– Listen to a concert at the Jazz Club!

Lots of excuses to go out, meet again and keep us caring and loving! Thanks to all of you that participate in La Marató! We wait for you next year!