Every September 24th and during a whole week, Barcelona celebrates its “Festa Major” – Barcelona’s festival of festivals, a celebration which goes back more than two-hundred years. La Mercè captures the character of the city itself, and transforms Barcelona into a grand stage bursting with fantasy and imagination. Over 600 activities and shows go on during the week in the streets, parks and squares of the city, with more than 2,000 artists taking part.

One of the most outstanding events of the program are those having to do with our roots and traditions, which reflect Catalonia’s popular culture as a whole. The parade of the gegants (giants), the castells (human castles), the sardanes (popular dances), the correfoc (fire-run) and the street parades with bastoners (stick dancers), grallers (a kind of oboe) and trabucaires (carrying blunderbusses), bring people onto the city streets, making this traditional programme one of the largest public events in the whole of Europe.

No doubt: traditions have always been and continue to be one of the pillars of the Festa Major. Enjoy Barcelona’s festival of festivals!

The Gegants – from the past to the future

The gegants festival originated around the first Corpus processions. It is documented that in Barcelona in 1424 the first gegant, Goliat, took part. Despite these beginnings being recorded within a religious context, little by little the figures have gained a fun and totally festive meaning.

In the 19th century, the gegants of the villages and towns began to be an expression of local identity. In the 20th century, many giants were converted into representations of kings and queens. And in the last decades, many towns rediscovered the gegants as a way to express local and festive identity. This latest rediscovery of the giants marked the new era in the world of the geganter: an important phenomenon of associations started up, new constructors appeared, popular figures were recovered, and others were created in places where there had been no previous tradition of giants.

On top of this, the groups, or colles, consolidated as legally constituted associations which have now become the driving forces of the associations and cultural life in many villages, towns and cities.

The phenomenon of gegants in Barcelona has ended up being a human movement of huge dimensions. The Coordinadora de Geganters de Barcelona is a guarantee that this old tradition has a great future. Many neighbourhood and district gatherings are held throughout the year, but the La Mercè festival is particularly the greatest one among all the gegants events. Will you miss it? 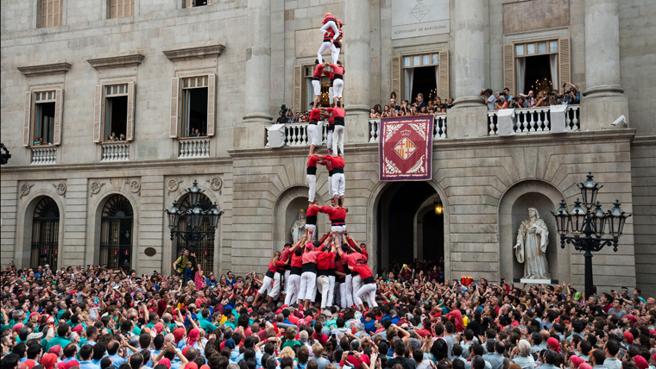 Festival human castles create architectural structures in which the basic building blocks are people. They are spectacular constructions of varying heights and shapes but with a common denominator: they all essentially require effort, technique and teamwork.

The Castell is undoubtedly one of the most eye catching and breathtaking traditions found in Catalonia. Granted protected status by UNESCO in 2010 as a display of ‘intangible cultural heritage‘ this elaborate practice sees teams of people build fragile 6 to 10 story-high human towers as stunned crowds watch on, mesmerized by the soundtrack of the toc de castells (the castle’s reveille). As the castle is erected, different tunes are played to identify what is happening. The gralla –an old kind of pipe– and the timbal –a small drum– are the traditional musical accompaniment to the process of building a human castle and are as much an exciting part of it as the castle building in itself. 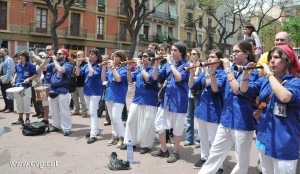 Most towns and villages in Catalonia have their own Castell team, which compete regularly in prearranged tournaments across the country. While it is a topic of debate as to whether these tradition represents mere spectacle or sport, it cannot be said that the participants are not willing to risk life and limb to express their unique national identity. Indeed, once the youngest Casteller has scrambled their way up to the summit and regained their balance, it is customary to see them raise four fingers into the air – a gesture representing the vertical stripes of the Catalan flag. Go and see it by yourself in the Mercè festival! 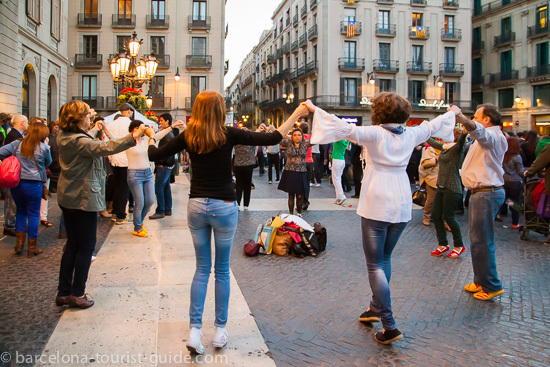 The Sardanes folk dance may be a lot less eye catching as a cultural act than that of the Castell and Gegants, but it is an inclusive, accommodating dance that has served to unite the Catalan people since the 19th century, and for this reason it is dearly treasured as an expression of national identity.

Participants hold hands in a circle, raising and lowering them to the music of the cobla (the traditional band made up of 11 musicians, all playing wind instruments except for a little drum). It is the Sardana’s gentle nature that enables people of all ages, backgrounds and abilities to come together in celebration of their shared heritage. It happens quite often to see the circles become so large that breakaway groups are formed and the dancers, young and old, experts and first-timers, split off into separate circles to dance together, side by side, in any festivity across Catalonia. 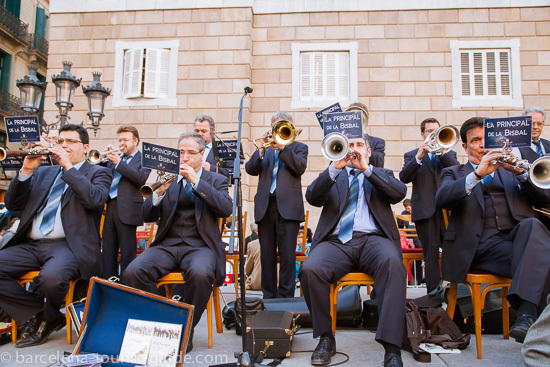 In Barcelona there are Sardanes dancing every Sunday at noon in front of the Cathedral. And of course La Mercè festival of festivals always incorporates Sardanes in its program as one of its most popular and inclusive events. So don’t be shy: just join the circle and try the steps!