The boulevard of broken tyles: Gaudí’s most known mosaics

One of most famous symbols of Barcelona’s identity, the mosaic technique used by Gaudí, like many artists in Catalan Art Nouveau, is still in vogue. 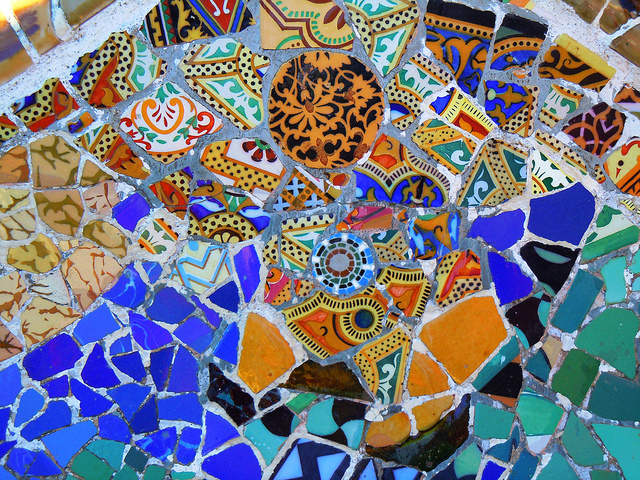 The name of this technique comes from the main feature perceived at first sight: broken tiles, plates and cups. Trencar means in Catalan ‘To break’, hence trencadís is the equivalent for ‘breakable’. The breakable pieces were originaly recycled for finishing uneven corners, and it is inspired by the the neo-mudejar style during the Arabic invasions in Spain as well as Opus tessellatum technique employed by the ancient romans. 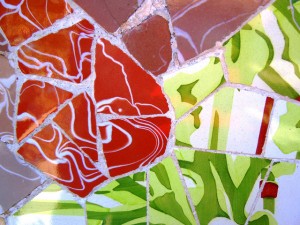 Mosaics – Details from the Park Güell

Therefore, the trencadís mosaic –also known in France as Pique assiette– is clearly not invented by Gaudí himself. Certainly however, he and his fellow colleague Josep María Jujol together with many other modernista artists became the some of the most imaginative figures employing this peculiar art to fulfill their tridimensional fantasies.

It’s been said that the genius architect went to the ceramics factory from the company called Pujol i Bausis, and told them to literally take a handful of pieces.

The effects achieved are staggering and diverse. 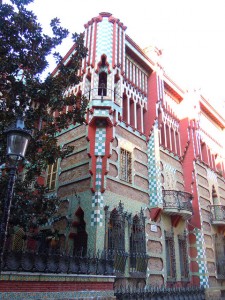 Casa Vicens: Even in his early creations, Gaudí applied the trencadís

Gaudí’s skillful application of the trencadís has become so known worldwide that most people even call it “the Gaudí Mosaic”, and is featured in many books. Among the most popular mosaics by Gaudí we would like to highlight the ones from Casa Batlló, Casa Milà and Sagrada Familia, if you are in Barcelona, you can see the three of them in just one morning. 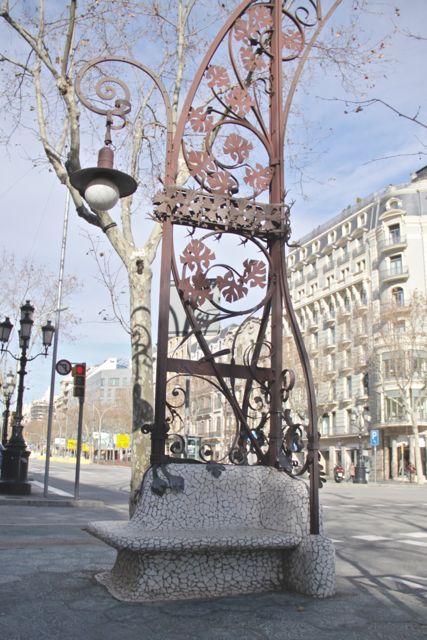 The trencadís became Gaudí’s best ally for his two houses in the Passeig the Gracia, Barcelona’s most glamourous boulevard of broken tiles, where even the lampposts designed by Pere Falqués have benches covered with trencadís mosaic, perfectly matching the essence of La Pedrera: this house with no structural walls, nothing but pillars in charge, has no squared shapes, no edges.

One of Gaudí’s most visited masterpieces, also placed in the Passeig de Gràcia, the house he restored a century ago for the Batlló family is with no doubt a fairytale. It lies somewhere between mythology, futurism and archeology. From the street you can see trencadís mosaics all over the façade, an architectural impressionist painting, whereas from the inside, made entirely of blue ceramic fragments a waterfall pours down through the lightwell. 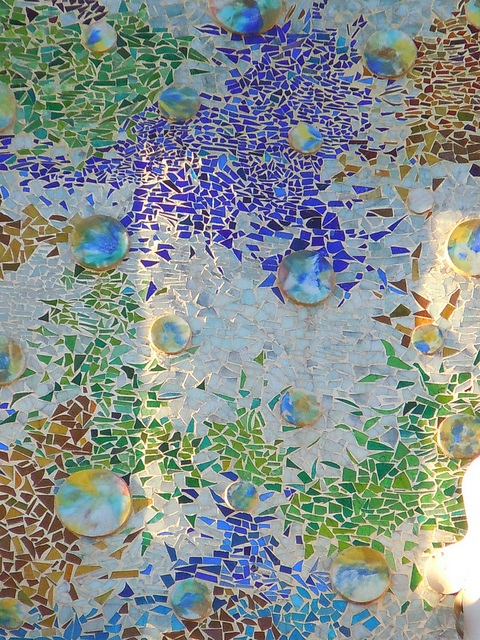 The Japanese sculptor Etsuro Sotoo has been working for more than 35 years in the construction of the Sagrada Família with one question constantly popping in his mind: what would Gaudí do? No doubt the trencadís is such a resolutive technique, all pieces can be used, and Etsuro Sotoo has never doubted to apply it in the pinnacles and sculptures representing different simbologies of the Bible. Not only ceramics are being employed for the trencadís mosaics in the Basilica of the Sagrada Familia, other more priced ones such as gold or Venice glass are reflecting the towers of this marvel.

Skip the line to enjoy this artistic fantasy in total comfort with some of the best licensed guides in town; come and meet the trencadís, come and join the Gaudí Tour, and don’t let your amazement fall into pieces!