What influence did Barcelona have on Pablo Picasso? or was it Picasso on Barcelona? 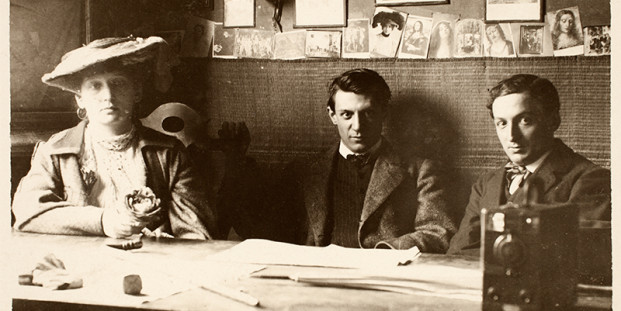 Picasso in Barcelona with the Reventós Family

A painter friend of mine told me the other day “Picasso is my favorite Catalan artist”.

Of course I like Picasso too, can we consider him as a Catalan Artist?  Technically the answer is no.  Pablo Picasso was born in Málaga (Andalucía) in 1881 and it was not until 1895 that he moved to Barcelona, where Picasso’s father took a position at its School of Fine Arts.  Picasso stayed on and off at Barcelona until 1904 when he definitively moved to Paris.

Could there be a better place to be for a restless genius than Barcelona between 1895 and 1904?  Frankly speaking: not too many.  Barcelona emerged in those years from the rest of Spain.  The economic industrial impulse had created richness but also revolutionary political movements.  It was a place full of opportunities and a center of advanced ideas.

The great Universal Exhibition in 1888 had changed the face and history of Barcelona, introducing disruptive ideas of modernity to a capital that was still light years away from the advanced heart of Europe.  New lifestyles, new wealth and new creative visions went hand in hand with the region’s industrial and economic expansion.

The effects of this effervescency where clear – urbanistic reforms, property speculation, rich bourgeois showing off their money and their position in contrast with shanty towns, the first communist and anarchist movements, bombs and violence on the streets.

Barcelona was the Spanish Manchester, the Paris of the South and The Rose of Fire or rather La Rosa del Foc in Catalan, the code name used by twentieth century anarchists to refer to Barcelona.  Imagine, it was the first city in Europe to call a General Strike!

During those years, night ran into day in Barcelona and the cafés and meeting places along the Rambles and the Gothic Quarter vibrated with people and encounters. Poets, intellectuals and painters were based at Els Quatre Gats, the neuralgic center of the moment.  It was indeed an incredible intellectual fertile period and for sure the integration of Picasso in these circles opened his mind to modernity.

In this Barcelona of the change of the century, he received for the very first time the influence of the European artistic movements from the hands and the works of artist as Russinyol, Ramon Casas or Isidre Nonell. It was at the Quatre Gats where Picasso organized his first individual exposition in February 1900.  It was in the very center of the old Barcelona where Picasso had his ateliers.  It was in Barcelona where he developed the Blue Period – his first personal period.  It is Barcelona what he paints when he is in love with Olga and comes back in 1917.

Barcelona, There is where I understood how far I could reach – Pablo Picasso

His progress can be traced in the collection of early works now held by the Museu Picasso in Barcelona, which provides one of the most comprehensive records still existing of any major artist’s beginnings.

Want to find out more? Come to the Picasso Museum and Gothic Quarter Walking Tour. An experienced guide will introduce you to Picasso’s early years and his bond with Barcelona.